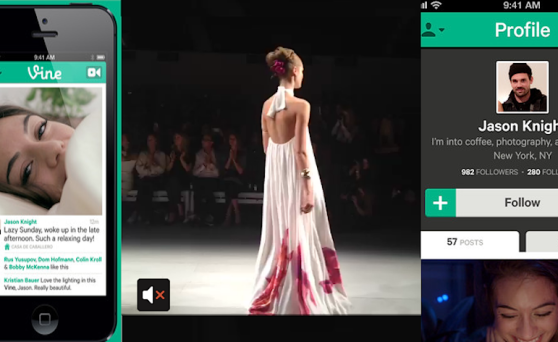 I’ve been a big fan of Vine ever since I first discovered it a few weeks ago and although it is clearly still in it’s infancy I’m going to call it now – Vine is going to be big and it’s here to stay. I’m willing to bet it becomes a part of mainstream culture. It is the natural progression of social video. I believe this for several reasons but the three most compelling to me are:

1. Effortless - It is essentially an extension of Twitter which is still the world’s fastest growing social platform.* 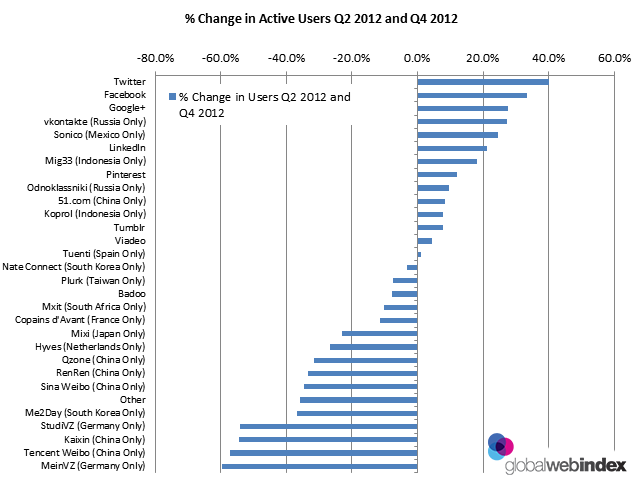 It takes literally seconds to open your Vine account by signing in with Twitter and all your Vines can be posted effortlessly and immediately to Twitter whilst featuring all of the same functionality (text, hashtags and links). Video for Twitter – what’s not to like?

2. It Works - The functionality is excellent. I won’t elaborate further as many others have already done so.

3. Short and Instant – Videos are restricted to 6 seconds and post immediately. I think this is Vine’s biggest strength. It’s what makes Vine a really desirable product. The same simplicity that has made Twitter (and memes and gifs) so successful has been applied to Vine. People like formats. We have a huge appetite for the familiar repackaged (Harlem Shake) and above all, online we like immediacy and brevity. If you need any more convincing here's a handy slide. 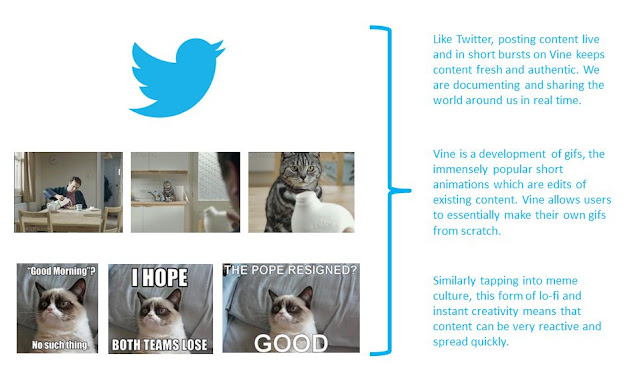 Vines are fun to make and fun to watch. Watching video online keeps getting more popular** and to me it seems clear that people will start to document and broadcast their lives through video in this more ordered fashion, as they already do in pictures / Instagram and words / Twitter. Inevitably there will be a lot of shit but that all just comes down to who you follow / your friends are. There’s already a lot of cool stuff out there and I think it’s only going to get better.

Having said all of that I can’t see Vine in and of itself becoming a social network like say Instagram. To me it feels like a way of making videos for your existing social networks, which I for one don’t need more of.

As with any advertising, whether you can deliver a large enough ROMI is central in determining whether or not you should be using Vine. I believe the ROMI for almost any brand on Vine will be good. I say that because Vines are quick and practically free to make. The investment will be almost zero meaning your return stands a fair chance of being worth wile.

Clearly it’s very early days and no doubt ‘content strategies’ are being furiously written and rewritten to fit the great ideas flying out of creative departments but I think it’s as simple as this:

1. Experiment like mad with all sorts of creative executions about all sorts of stuff you think might be interesting.

2. Occasionally show off the odd product with a link that let’s you measure traffic.

3. Measure the financial value of the traffic generated. ***

What do you reckon?

P.S. Check out brandsonvine.com (or @brandsonvine) to stay up to date


*Source: Global Web Index
**Source: Nielsen
*** Caveat: If you’re an online retailer this shouldn’t be too hard. Clearly for FMCG brands this last bit is difficult and (unsurprisingly) I don’t have the answer to measuring the financial value of online engagement, that’s a whole other argument, as you well know. I would just say that if you are already using social media, Vines will probably make your content better and will definitely cost you nothing.